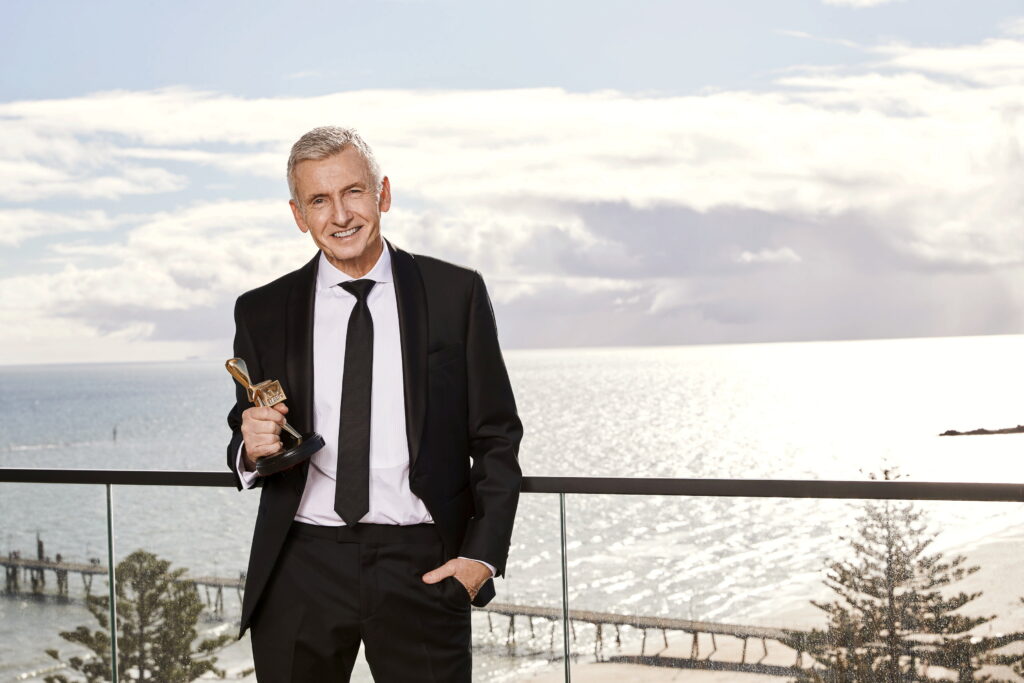 The most recognised, respected and loved sport commentator in Australia, Bruce started his television career at Seven News in Adelaide in 1978 and went on to present many high-profile sports throughout his career, including AFL, horse racing, athletics, motor racing, tennis, golf, and Olympic and Commonwealth Games.

The legendary broadcaster is synonymous with major sporting events, including the AFL Grand Final, Melbourne Cup, Australian Open tennis, Test cricket and the Summer Olympic Games, covering every Olympiad from Moscow 1980 through to Tokyo 2020, with the exception of the 2012 Games.

Seven West Media Chairman, Kerry Stokes AC, said: “For generations, the Logies have honoured the best in our business – people who have entertained and informed Australians their entire lives.

“Bruce McAvaney is one of those. His sense of timing, combined with the right words and expert knowledge, are impeccable.

“His call of Cathy Freeman in Sydney 2000 is already immortalised. And yet in 2005, when Makybe Diva came back to scale after winning her third Melbourne Cup, he simply said nothing and let the pictures speak for themselves. That’s what makes him stand out. It’s not about him.

“But for all the things he’s done, there is one quality I cherish more than anything. Bruce McAvaney is a great bloke. Always has been, always will be,” added Mr Stokes.

Bruce said: “We don’t get many chances to reflect on our working life. It’s always a matter of planning for the next big sporting event, always looking forward. But something like this makes you look back. And the overwhelming emotion is feeling you’re not worthy. You’ve been the recipient of incredible opportunities which have taken you into people’s lounge rooms. And supported by teams of specialists whose job is to make you look and sound good. I’m a passionate sports lover, of stats and stories, and so are many other people and I think it’s a measure of what sport means to Australians to have been awarded this honour.”

Seven West Media Managing Director and Chief Executive Officer, James Warburton, said: “The TV Week Logie Awards Hall of Fame award is a richly deserved honour for Bruce, and we couldn’t be happier for him.

“Bruce has been part of the fabric of Australian sport – and of Seven – for more than four decades. His extraordinary knowledge, passion, dedication and professionalism are legendary and inspiring, and he has been a wonderful mentor for many people at Seven. Congratulations Bruce. What a moment, what a legend!”

Seven Network Managing Director, Melbourne, and Head of Network Sport, Lewis Martin, said: “I’ve worked with Macca for 25 years, through good times and tough times. He is a great colleague and a great mate. We’ve had a lot of fun and laughs together and shared some incredible successes. He is a broadcaster without peer and has made a remarkable contribution to Seven, Australian sport and the media industry. Well done, Macca.”

The TV Week Logie Awards Hall of Fame achievement joins a long list of honours Bruce has received over the years, including the Medal of the Order of Australia in 2002 for service to sports broadcasting and to the community through charitable and sporting organisations; induction into the Sport Australia Hall of Fame (also in 2002); the International Olympic Committee Media Award in 1989; the inaugural TV Week Logie Award for Most Outstanding Sport Broadcaster in 1999; and the Melbourne Press Club Lifetime Achievement Award in 2020.