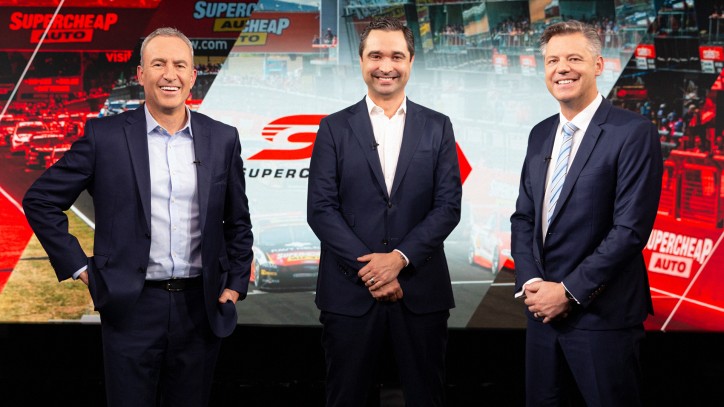 Supercars returns to Seven from 2021! Seven races Live and Free every year. Highlights from other races on Seven Network the same day.

The Seven Network today announced the return of Supercars to the Network from 2021, marking the next chapter in the Network’s storied history of motorsport broadcasting. The longterm agreement between Seven and Supercars will see Supercars form a key part of Seven’s leading sports coverage into the future.

From 2021, six Supercars races will be broadcast Live and Free on the Seven Network, including the iconic Bathurst 1000, plus the Bathurst 12 Hour race. Seven’s Live and Free coverage will include live streaming on 7plus, Seven’s market-leading BVOD platform. Highlights from other races of the Supercars Championship will be replayed on the Seven Network and 7plus the same day of the race, delivering a comprehensive and unbeatable experience for fans, for free.

The return of Supercars to Seven marks the next step in Seven’s motorsport legacy and builds on the Network’s history of broadcasting Supercars, which it previously did from 1963 to 1996 and again from 2007 to 2014.

Seven and Supercars have so much shared history, so we’re excited to begin the next part of our story together with this multi-year deal. Seven has long been a pioneer in motorsport coverage; our world-leading innovations include the iconic RaceCam, which made its debut in our coverage of the 1979 Bathurst 1000.

I want to thank Sean, the Supercars Board and the Supercars team for this outcome, which is a great result for Seven, Supercars, and most importantly, the fans. It will help fuel the growth of the sport into the future. We can’t wait to bring Supercars home to Seven from next year.

This is an exciting day for Supercars. Not only are we continuing our great relationship with Fox Sports, but now announcing a new agreement with our original broadcast partners, the Seven Network for our free to air coverage. This caps off a great few months for the sport in challenging times which is testament to all the work that the entire team has put in to not only keep this year’s championship going but preparing us for the future too.

Motorsport has always been a passion of ours at Seven, and there’s no greater motorsport in Australia than Supercars. We’re thrilled to bring Supercars back to Seven from next year and with it what are sure to be so many more iconic Australian motorsport moments.

This partnership between Seven and Supercars is going to deliver a spectacular experience for viewers, with these key races Live and Free on Seven and 7plus, and every race replayed the same day – simply an unbeatable offering.

Everyone at Seven is excited to continue our legacy of broadcasting Supercars, delivering our audience a better experience than ever before.

Seven’s coverage of Supercars will begin as the 2021 Supercars Championship gets underway early next year.