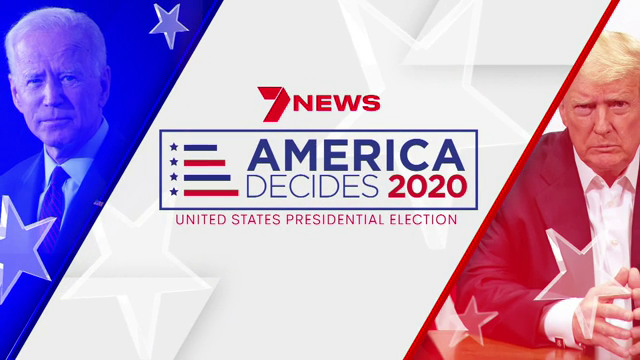 7NEWS is your definitive source for the United States Presidential Election.

7NEWS will deliver Australia’s most in-depth coverage of the US Presidential Election – which shapes as one of the closest and most divisive polls in American history – featuring up-to-the-minute polling results, informed commentary and analysis from an unrivalled team of journalists and political experts LIVE on air, on 7plus and across 7NEWS.com.au and social platforms.

Committed to bringing viewers the most comprehensive and dynamic election coverage, across the week 7NEWS will broadcast every dramatic moment and all the madness as the race to the White House unfolds, backed by the exclusive resources of global broadcast news affiliates CNN and NBC.

All-day special coverage begins Wednesday with a special extended edition of Sunrise LIVE from 5.30am AEDT, with Kochie and Sam LIVE to Natalie Barr in Washington, D.C.

Then join Michael Usherand Angela Cox, Seven’s former US Correspondent of seven yearswho covered two US elections, for all-day LIVE rolling coverage from 10am AEDT. They’ll cross to 7NEWS US Bureau Chief Ashlee Mullany from inside Donald Trump’s camp and US Correspondent Tim Lester on the campaign trail with Joe Biden, while US Correspondents Paul Kadak and David Woiwod will have on-the-spot analysis from key battleground states across the US.

Joining the team throughout the day to provide insight and analysis are Professor Simon Jackman, CEO of the United States Studies Centre at the University of Sydney and one of Australia’s leading experts on US politics, foreign policy, public opinion and polling, and Damien Cave, the New York Times’ award-winning Australian correspondent.

Full details plus the day’s other headlines in your local 7NEWS at 6.00. Then tune in for a special edition of The Latest with Michael Usher LIVE from 10.30pm AEDT.

The high stakes, the madness – don’t miss a moment as the Greatest Showdown on Earth unfolds. Join 7NEWS for all-day coverage of the US Election starting with Sunrise LIVE from 5.30am (AEDT) Wednesday on Seven and 7plus.

Stay up to date with the latest on the United States Presidential Election race at 7NEWS.com.au