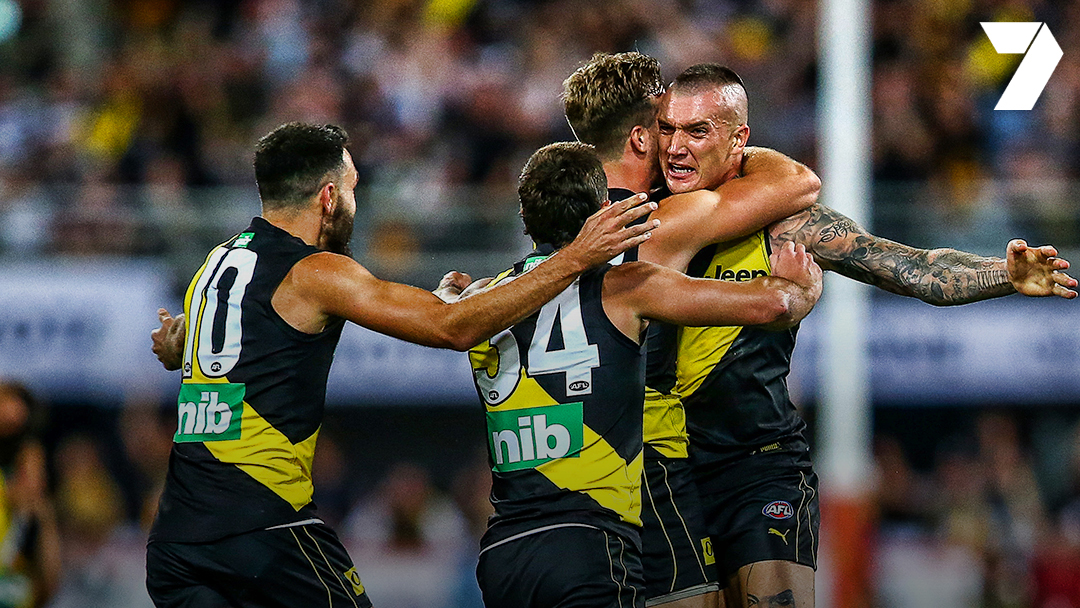 By swmadminOctober 26, 2020SEVEN
No Comments

As Richmond secured an unforgettable 31-point win over Geelong in the 2020 AFL Grand Final, Seven’s coverage reached 7.5 million people across Australia, while its average national audience of 3.812 million was 30 per cent upyear on year and the biggest Grand Final audience since 2016.

On a night when Dustin Martin became the first player to win three Norm Smith Medals, Seven recorded an average metro audience of 2.979 million, a whopping 36 per cent up year on year. It was also the biggest metro primetime audience on any network since Seven’s coverage of the 2017 Australian Open Men’s Final.

Seven also recorded a 76 per cent metro commercial share, the biggest ever recorded.

And on the first occasion the Grand Final had ever been held outside Victoria, Melbourne recorded a Grand Final audience of 1.583 million, up a staggering 59.8 per cent on last year’s Grand Final.

The AFL’s first ever night Grand Final saw strong audience growth right across the day on Seven, with the Grand Final Preview up 64.4 per cent year on year in metro areas, while the pre-match entertainment was up 92.3 per cent.

On a day when two of the Australia’s greatest ever sporting events – the AFL Grand Final and the Cox Plate – converged for the first time ever, Seven recorded its highest live streaming day (24 million minutes) since the 2016 Rio Olympic Games, while it was Seven’s second highest total streaming day of all time (40.8 million minutes).

On 7plus, the AFL Grand Final recorded nearly 16 million streaming minutes and was up a remarkable 215 per cent year on year.

And every market’s average audience was up on last year’s Grand Final between Richmond and the GWS Giants.

In Brisbane, Seven’s audience of 383,000 was the biggest since the 2004 Grand Final between the Brisbane Lions and Port Adelaide and was up 20.7 per cent year on year.

The network’s average Sydney audience of 413,000 was up 11 per cent on last year’s Grand Final even though that featured the GWS Giants.

On a truly groundbreaking day, the highlights of Seven’s coverage included: